Welcome to a new week of books! This week’s theme is exciting to me because it involves one of my favorite genres, fantasy. We looked at our collection and tried to find books that a really exciting to read but are under appreciated in our library. Some of these titles haven’t been checked out in a few years. One series had a shameful amount of dust on them. As always the books can be read across most grades. They appear in this list starting with 3rd grade and go up from there. 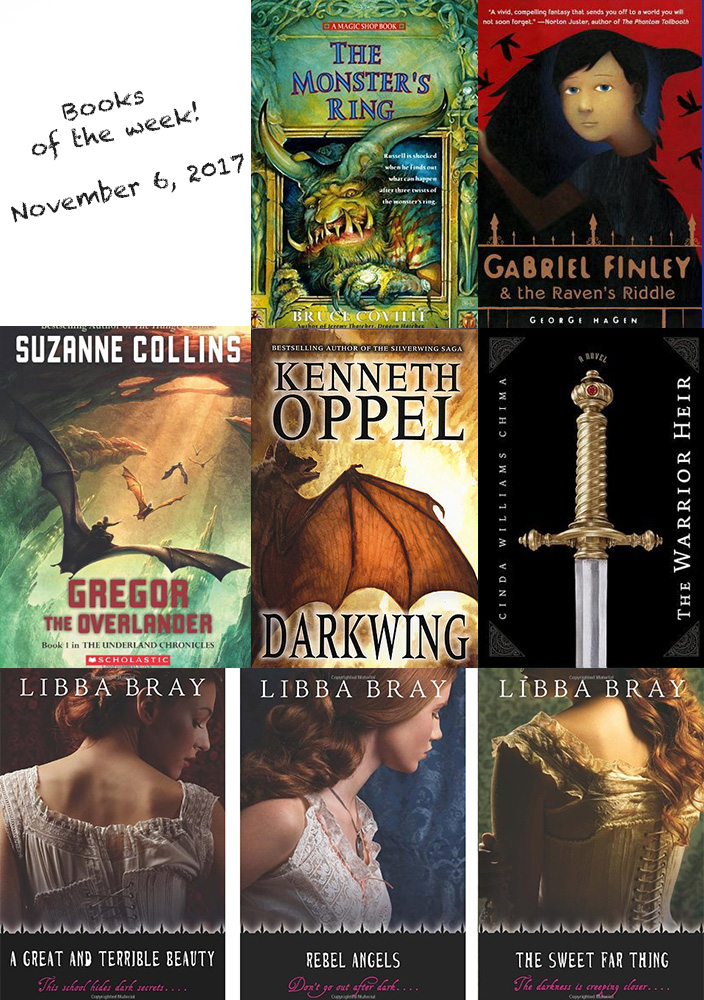 The Monster’s Ring by Bruce Coville

“A timid boy, eager to frighten the school bully on Halloween night, acquires a magic ring and the power to change himself into a hideous monster.”

Gabriel Finley and the Raven’s Riddle by George Hagen

“Eleven-year-old Gabriel, with the help of the young raven Paladin, with whom he has a magical bond, travels to the foreboding land of Aviopolis, where he must face challenges and unanswerable riddles to rescue his long-missing father..”

Gregor the Overlander by Suzanne Collins

“When eleven-year-old Gregor and his two-year-old sister are pulled into a strange underground world, they trigger an epic battle involving humans, bats, rats, cockroaches, and spiders while on a quest foretold by ancient prophecy.”

“Dusk is a misfit in his colony, a freak. He has only two claws instead of three, weak legs, unusually strong chest and shoulder muscles and the ability to see in the dark. And where other chiropters glide, he has the urge to flap his sails. He is a pre-bat, perched on a new branch of evolution. In the age when the saurians are dying out and mammals are on the rise, Dusk is a new kind of animal, and his is the story of the misfit finding the courage to spread his wings and fly. When his colony is attacked by a prowl of rogue felids led by the evil Carnassial, Dusk uses his skills to lead the survivors to a new homeland, with many adventures along the way.”

“Sixteen-year-old Jack discovers that he is one of the last warriors of the Weirlind, an underground society of magical people, and must fight to determine which house–the White Rose or the Red Rose–will rule the Weir.”

“After the suspicious death of her mother in 1895, sixteen-year-old Gemma returns to England, after many years in India, to attend a finishing school where she becomes aware of her magical powers and ability to see into the spirit world.”