Wow! The past 4 weeks have been crazy, fun and intense. The competition was fierce with most classes trying their best to read books and write reviews. In the end only one class from each library could win. If you want to see what the final day was like head over to the Falcon’s Fables Instagram to see the March Madness Highlights. What a fun March Madness 2018.

The B classes in the PLC competed this week. They all worked hard but in the end it was 1B that came out on top.

The bottom 8 classes competed in the LC. A few classes showed themselves to be strong contenders from the start. 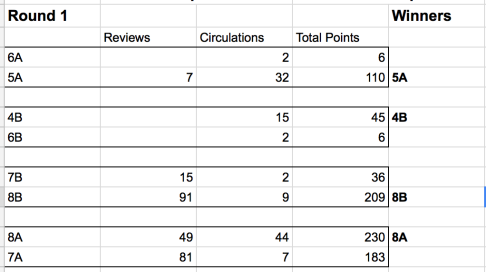 The A classes in the PLC competed in round 2. They were all very enthusiastic after watching the B’s in round 1. By the end of the week 2A was the winner and moved on to the PLC finals.

In the LC the four classes that won round 1 were joined by the top 4 classes overall. Things really started to heat up this week.

This was the finals for the PLC. At the same time the LC was out of commission due to a plumbing issue. This only added to the craziness that is march madness.

In the PLC it was 1B against 2A. Both classes worked enthusiastically. Many books were circulated, read and reviewed. By the end of the week 2A won by just 5 points. What a close match!

In the LC it was 3B vs. 5B and 8A vs. 8B. We saw early on how determined 5B was to win this competition. Meanwhile with 8A and 8B against each other Mrs. Bello and Mr. W. helped rally their classes. It was the first time in competition where both 8th grades really got into it.

The finals in the LC found us able to go back downstairs which was wonderful because the match between 5B and 8A was insane. Both teams were determined to win and would not let up. Every day they were checking out books, reading them and then writing reviews. Not only was this the first time that a Jr. High team was in the finals but it was the first time we Broke 1000 points. Ms. Natalie spent the entire last day tallying reviews. In the end 8A emerged the winner of March Madness 2018.

We hope you had fun playing!

One thought on “March Madness Recap”